The winter reports by our Fell Top Assessors sometime contain specialised vocabulary, especially about snow conditions. Here are some more details about the words and phrases they use. There's also a table explaining what wind speeds mean in reality:

A projecting build-up of snow that take the form of an overhanging ledge on the lee side of a ridge or where a sharp change in slope angle occurs. One example is where a summit plateau drops away into a corrie. Cornices can be extremely unstable - particularly when freshly formed or whilst thawing. Avoid walking above them. 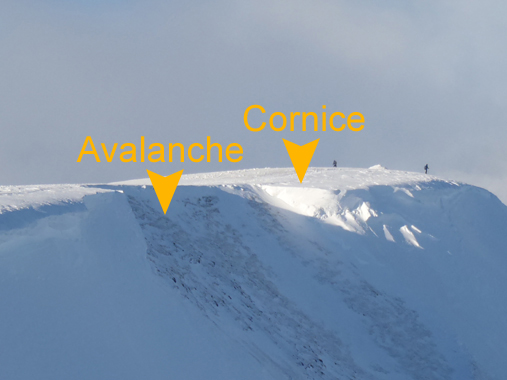 Photo: Cornice on Helvellyn summit with an avalanche, caused when the cornice slipped 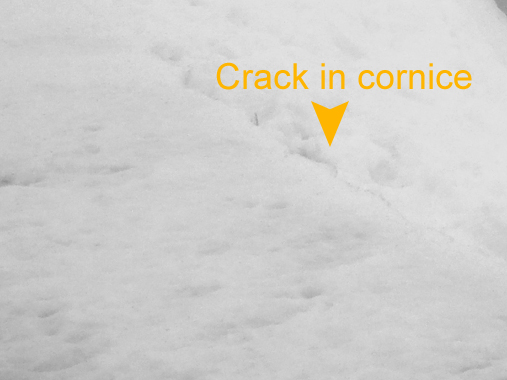 Photo: Can you make out the crack in the cornice?

A type of snow that is formed from supercooled water droplets freezing onto a falling snowflake. Also known as soft hail, graupel appears as small rounded pellets similar in appearance to expanded polystyrene. When trapped between layers of snow, graupel can render the snowpack very unstable, as they can act like ball bearings between the layers. 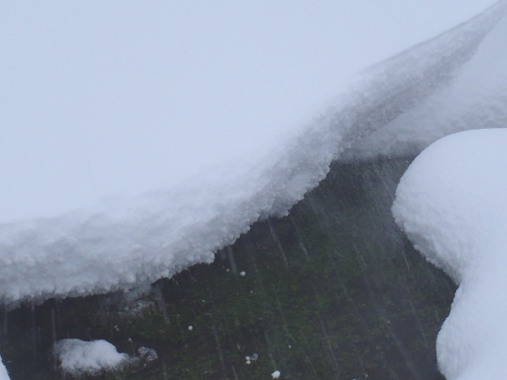 Snow that has undergone several cycles of thawing and freezing which helps to consolidate the snow pack. This makes the snow strong and stable, creating good underfoot conditions for walking and climbing.

The white icy crust that builds up on the windward side of objects. Rime 'grows' into the wind as super-cooled water droplets freeze on contact with the surface. This often creates creating beautiful, feather-like structures which can grow to a considerable size.

Fine snow, picked up and blown around by the wind that can result in very poor visibility.

Thin, clear ice formed from the freezing of standing water – the mountain equivalent of 'black ice'. Verglas can be treacherous, particularly when hidden under a layer of loose powder snow. 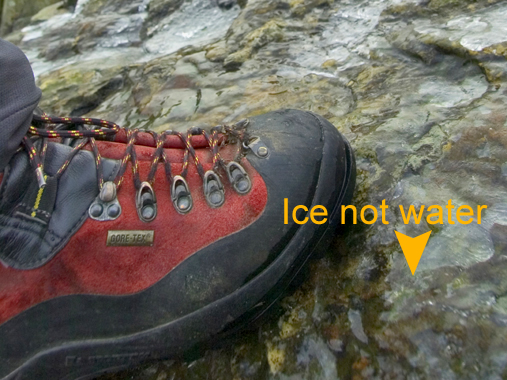 Photo: Verglas - the black ice of the mountains

Snow that has been re-deposited by the wind. This is in contrast to powder snow which is loose, unconsolidated snow that has fallen in light winds. The turbulence of the wind breaks up the snow crystals and re-deposits them on lee slopes, where considerable accumulations may occur and become very unstable.

Wind speed: what does it mean when you're out on the fells?

All open in new window: