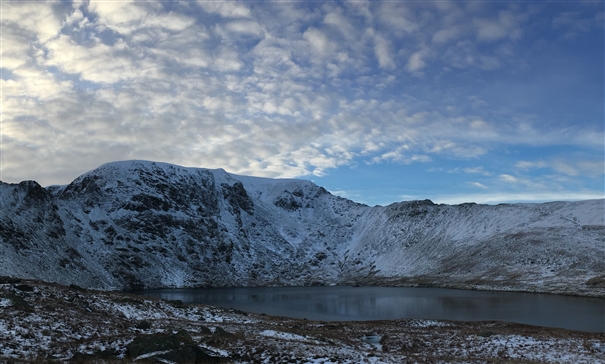 The Helvellyn massif's location (very high and north facing) means it often gets hit with winter conditions before other Lake District venues, so it's a popular choice right after a cold snap or snowfall. Following the success of a similar system on Great End last winter, a monitoring system on Helvellyn has been a high priority due to the popularity of winter climbing on the massif and the fact that it provides a real haven for some exceptionally rare plants, which are easily damaged if climbed on when turf isn’t solidly frozen.

The BMC has been working in collaboration with Natural England, John Muir Trust and the Lake District National Park Authority to make the project a reality since summer 2017. This is exciting news for winter climbers and should give conditions specific information to help plan winter trips to the Lakes. 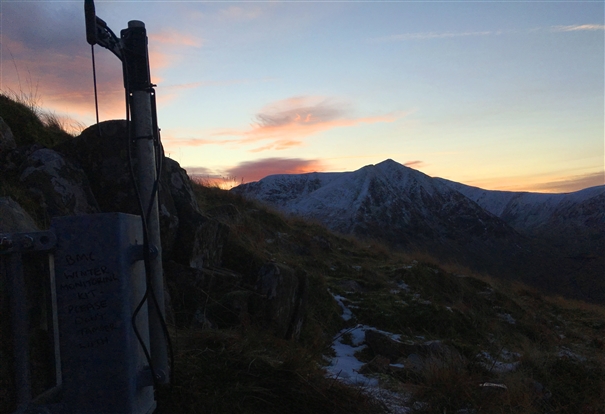 Why is Helvellyn so special?

Alpine saxifrage grows in only two locations in England currently and both are on Helvellyn – one on the route Rape and Pillage on Viking Buttress and the other in Nethermost Gully in Nethermost Cove.

Alpine meadow grass grows in Nethermost Cove - one of only four locations in England.

Of course there are many other crags which host a wide variety of important and extremely rare arctic alpine species which don’t have monitoring systems in place on them. The Lake District White Guide provides all the information you need for winter crags in the area with sensitive habitat which require careful consideration of conditions before climbing. 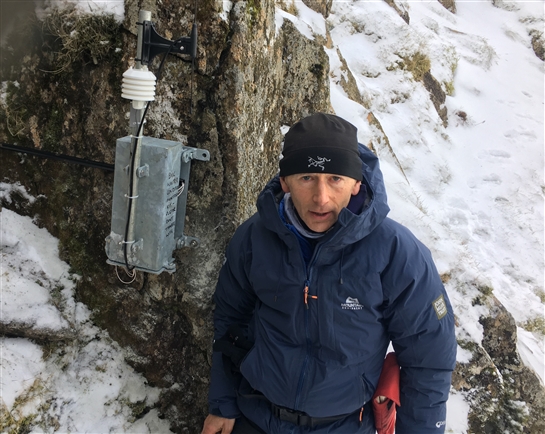 The good news is that placing axes and crampons into solidly frozen turf will do virtually no damage to the habitats these plants depend on. The worst possible scenario however is a winter climber in marginal conditions, tearing unfrozen turf off the crag and removing the habitat needed for these plants to take root and survive. It takes many years for the depth of soil to develop on ledges and in cracks, so removing it can be disastrous.

Of course as winter climbers we should be keen to avoid this not only to protect these incredible plants, but also for our own self-interest given that turf loss can completely change the nature of a route transforming a classic line with bomber turf placements into an unpleasant grovel, many grades harder. The bottom line is always make sure that turfy winter lines are well frozen to prevent habitat damage and maintain the quality of the winter climbing resource available for future ascensionists. If the turf on your route isn’t frozen, don’t just climb it anyway - find a different objective which is frozen or not reliant on turf. 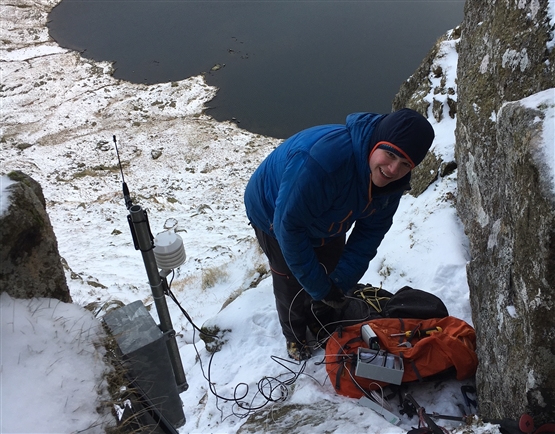 How does the system work?

The Helvellyn system is more complicated than those used at Great End and Idwal previously due to the lack of line of sight between transmitter site and receiver and increased distance, meaning that an additional repeater unit was needed to get the signal down to the valley. The system works using an air temperature sensor and three temperature probes buried in turf (at 5cm, 10cm and 15cm depths) at 830m slightly left of the centre of the Red Tarn face, away from climbing routes. This provides a similar aspect and altitude to the start of many of the routes on the crags of Red Tarn Cove, and is in a position that allows the transmitter at the sample site to connect to a repeater station on Birkhouse Moor, which in turn bounces the signal on to a receiver and upload unit at the Visitor Centre in Glenridding.

As with the Great End system, hourly readings are transmitted for air and turf temperature and trends up to 30days previous can be interpreted using the graphs. For the Helvellyn system, we have decided to trial different turf depths for the turf sensors following user feedback from Great End and Idwal, going for 5cm/10cm/15cm instead of 5cm/15cm/30cm used at the other sites. The main thinking behind this is that turf is only likely to freeze to 30cm in extended periods of exceptionally cold weather, when almost everything is likely to be frozen solid. Given that the main focus of the project is informing climbers about marginal conditions, temperature readings at shallower depths could be more useful in assessing conditions (or they could just provide three very similar readings). This remains to be seen, but we will compare the two systems over the winter and review in the spring – if needed we can change either site in the future if one setup proves more useful than the other. 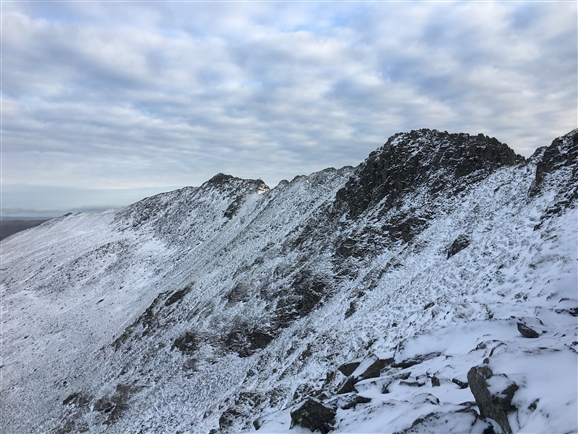 How can I use the data?

The data provided by the systems in the Lakes and Snowdonia is very accurate for the precise location of the sensors, but bear in mind that the sensors haven’t been placed on the particular route you want to climb and user discretion is essential. Given that different routes on the same crag can often have widely varying conditions, the conditions at the sensor location (at the same altitude and aspect as many routes), whilst likely to be similar may not be exactly the same as those on the crag or different parts of the crag.

These systems will never provide a straightforward yes/no answer as to whether conditions are good, but they do provide more accurate, current and location specific data which can be used in conjunction with weather forecasts, ground conditions reports, webcams, trip reports etc to help you piece together an idea of how conditions are shaping up.

Turf on ledges (similar to where the sensors have been placed) can be insulated by accumulating snow which often prevents freezing, whilst steeper faces which don't accumulate snow could have turf exposed to the wind which is solidly frozen. Don’t forget however that turfy ledges on routes are a common feature and often where large colonies of arctic alpines grow. Arguably the air temperature sensor could be the most useful as it won’t be affected by snow accumulation, but using the turf sensor data in combination with Lake District Weatherline, MWIS and Met Office weather forecasts should help to build a picture about whether snow insulation could be affecting readings. To me the most useful feature is the ability to view trends over a number of days, as a minimum of several days of cold weather is usually what is needed to freeze turf properly and bring routes into condition.