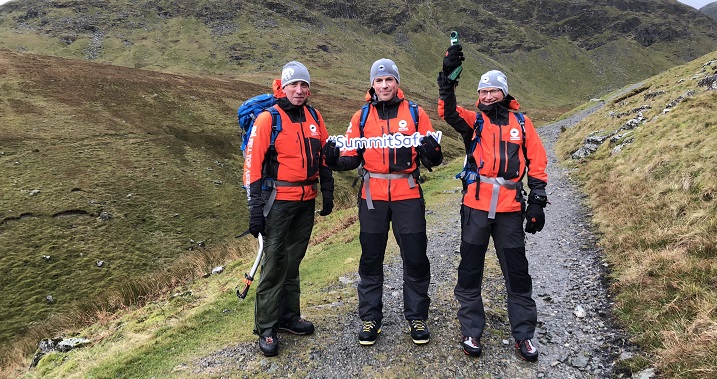 Snow has been spotted on the fells over the past week which not only heralds the start of winter but also the season launch of the Lake District National Park’s Weatherline service.

Between now and April one of the Lake District National Park’s three specialist fell top assessors will, on a daily basis, climb to the summit of Helvellyn, a 950m high mountain, to assess snow and ground conditions and compile a daily report for outdoor enthusiasts.

And for the inaugural ascent of the season this year, the fell top assessors were joined by two members of the public who learned first-hand how to winterise their approach to walking once there’s snow and ice on the fells.

Darryl Ramage and friend Lynne Morrison were the lucky winners of a National Park competition, selected from over 1,000 entries to accompany the fell top assessors on their season launch and take part in a private winter skills course.

Darryl from Dumbarton in Scotland said: “We’re frequent walkers in the hills and mountains of Scotland have been all over Europe on expeditions. From Germany to Poland to Slovenia to Italy but we’ve never been lucky enough to climb in the Lake District so we are realising a lifetime ambition today.

“We’ve been following weatherline for the last couple of weeks and were celebrating the first fall of snow on the fells, it’s a fantastic resource to make sure you get an accurate idea of the weather and conditions on the fell tops.

“Although we are both quite experienced climbers we are by no means experts so we are absolutely delighted to be learning from the best today. We’ve picked up a lot of safety information and numerous hints and tips. It’s been great. We can’t wait to get back to the Lake District soon to put our new skills to good use.”

This vital Weatherline service, which has been running for 31 years, will give those heading to the mountains all the information they need about the conditions that day. Information is shared on a live Twitter feed by the fell top assessors during their mountain hike on @LakesWeather and online www.lakedistrictweatherline.co.uk.

“Although Helvellyn isn’t the highest peak in the Lake District its east-facing position means that it’s often in better winter condition than our higher fells. It’s also the busiest, most popular mountain in the Lakes during the winter months, so it’s important that we give detailed ground conditions reports from here throughout the season to keep walkers, climbers and skiers better informed. Our service will make sure that people can get an extremely accurate ground conditions report of what to expect on our highest fells, backed up with the latest Met Office weather forecast.”

As well as the ground conditions report the fell top assessors, Graham Uney, Jon Bennett and Zac Poulton, will be giving regular hints and tips on what the essentials are for a winter backpack, keeping safe on the mountains and sharing some of the breath-taking views with followers over the winter months.

Over recent weeks there’s been much media coverage about walkers and climbers setting out into the fells ill-prepared and then having to be rescued from completely avoidable situations.

Richard Warren is a member of Wasdale Mountain Rescue Team and chairman of the Lake District Search and Mountain Rescue Association. His key message is that it is vitally important to be prepared.

He advises that traditional navigation using paper map and a compass is an essential skill for all weather conditions but especially during winter. This can be backed up with GPS technology but, he says, it’s best not to rely solely on mobile phone technology.

Richard comments: “So, if you're planning a trip to the mountains this winter we urge you to plan your day, when there is snow on the tops an ice axe and crampons are essential pieces of kit, and know your limitations. If you're unused to navigating in the dark, it can be extremely disorienting.

“Sometimes, the bravest decision is to turn around and go back. Those peaks will still be there another day."

In addition to the weather service the Lake District National Park fell top assessors also run specialist one day winter skills courses to share their wealth of knowledge and make sure those attempting some of the higher summits are as prepared as they can be.

The courses are aimed at adults who want to learn more on how to deal with the extreme weather conditions the British winter can throw up. They can accompany the fell top assessor on his duties and learn essential winter mountaineering skills like how to use an ice axe and crampons properly as well as get advice and guidance on what other kit is needed to stay safe. Key navigation skills are also taught to help climbers identify routes and landmarks in the snow.

Lake District Weatherline is part funded by sponsors Columbia and Petzl and George Fisher. The Fell Top Assessors are kitted out by clothing sponsor Mountain Hardwear and have mountain equipment provided by Petzl ensuring they have the right gear to #summitsafely.